So far I have gotten two batches of steel tube.  The first was ASTM A500 and the second was ASTM A513.  Each was all they had in stock for 1x1x0.065 tube at the time.  So what's the difference, besides about 13 whatchamadingers?  In terms of mechanical properties, not enough for me to worry about.  They're both pretty standard hot rolled, seam welded steel tube.  However, at least as stocked by my steel supplier, the A500 was protected by a light mill scale...Where as the A513 was cleaned and protected by an oily residue.  Then which is better?  During initial handling, neither is great.  The A500 leaves black grime on everything it touches, and the A513 leaves oily residue on anything it touches.  However, the oily residue cleans off easily with a quick wipe down of Acetone.  The same cannot be said of the mill scale.

One of the popular ways to rid yourself of the Mill Scale plague, is by using a diluted acid solution, which can cause all manner of hazardous material problems that I have absolutely no interest in dealing with.  To mechanically remove it though simply takes time...Much more than anybody wants to spend doing it.  Some people simply do a half-assed cleaning of the tube, while only doing a whole-assed cleaning where the welds will be.  The idea is that the mill scale is well adhered to the tube, and there are paints that at least adhere well enough to the mill scale for it to not be a problem...But if you couldn't tell from my previous tube prep on the A513, I'll be doing it the complete and total assed way.

As seen in the picture below, at the top is the original flat black mill scale wiped of the initial loose grime.  Below that is the 'half-assed' cleanup.  This is a few lighter passes with a wire wheel, and has basically polished the mill scale to kind of a satin black.  The bottom shows the fully cleaned up steel, after numerous heavier passes with the wire wheel.  Off to the right, you can see the pile of tubes in the semi-finished state, and the one tube on the left that is fully-finished. 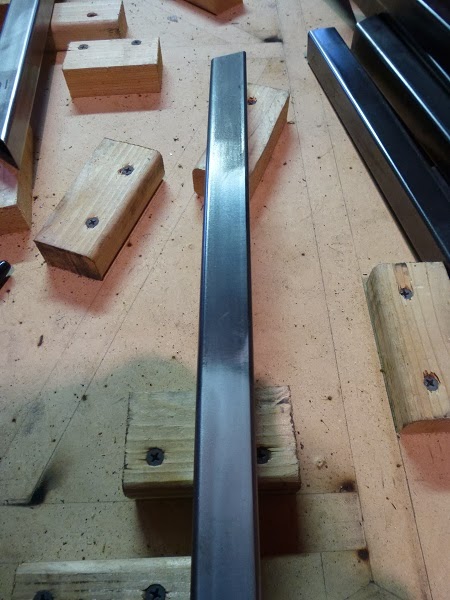 So if your steel supplier tries to sell you on tube with mill scale...In the immortal words of Bing Crosby, "don't think, don't pause, don't hesitate for a moment, just spit in his eye."
Posted by Garage Odyssey at 11:39 AM No comments:

As with anything else, the more welding I do, the better my welds are becoming.  It also means I'm figuring out those little tricks that create significant improvement in various specific welding scenarios that you don't even think about until after throwing yourself into those scenarios.  By the time I'm done with the chassis, I might actually make a half way decent welder!  Of course in the mean time, this means I get to look back on all of the welds up to the point of each new revelation and try to force myself not to simply start over.  It may however mean that the earlier sections of chassis will be getting a little additional gusseting...Just in case.

On the other hand, my overall results have been good with keeping weld distortion to a minimum so far.  After tacking the section all together, I pull it out of the 'jig' so that I can flip and rotate it around into whatever position will allow me to reach any given joint the most easily.  My technique starts off with welding all of the fillet welds on the inside corners for the main boxed segments first, alternating corners around the chassis.  Then doing the same with the outside corners.  After that is the fillet welds on all of the diagonals.  And last comes all of the the butt welds on either side.  Really the primary source of what distortion I have seen appears to be coming from any minor variances in tube fitment.  Wedge a tube in too tight, and when welded it bows the tubes on either side out.  Leave a little gap, and the weld will pull it closed.  None of this shows up well in pictures though.

However, I do have a picture illustrating one other method I'm using.  I find the hardest to reach weld for every tube joint, and figure out what position both of us (the chassis and myself) need to be in to most easily weld it.  This includes determining which direction the weld will go.  I then mark that next to the joint.  Every other joint around that tube intersection is then welded moving the same direction, such that the coldest part of the weld at the beginning overlaps the hottest part at the end of a previous weld.  Alternatively the hottest part of the weld at the end overlaps the coldest part at the beginning a previous weld. 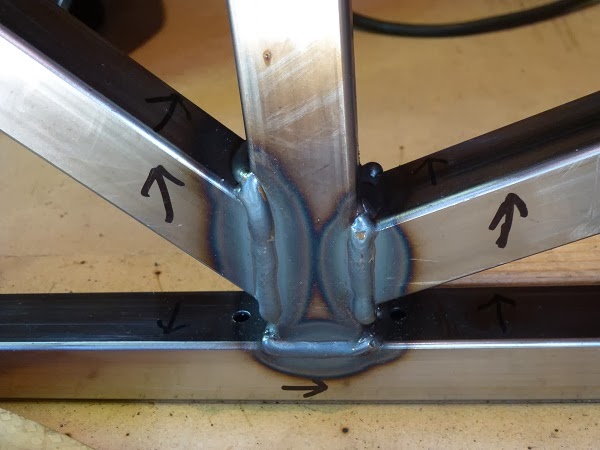 Posted by Garage Odyssey at 11:57 PM No comments: